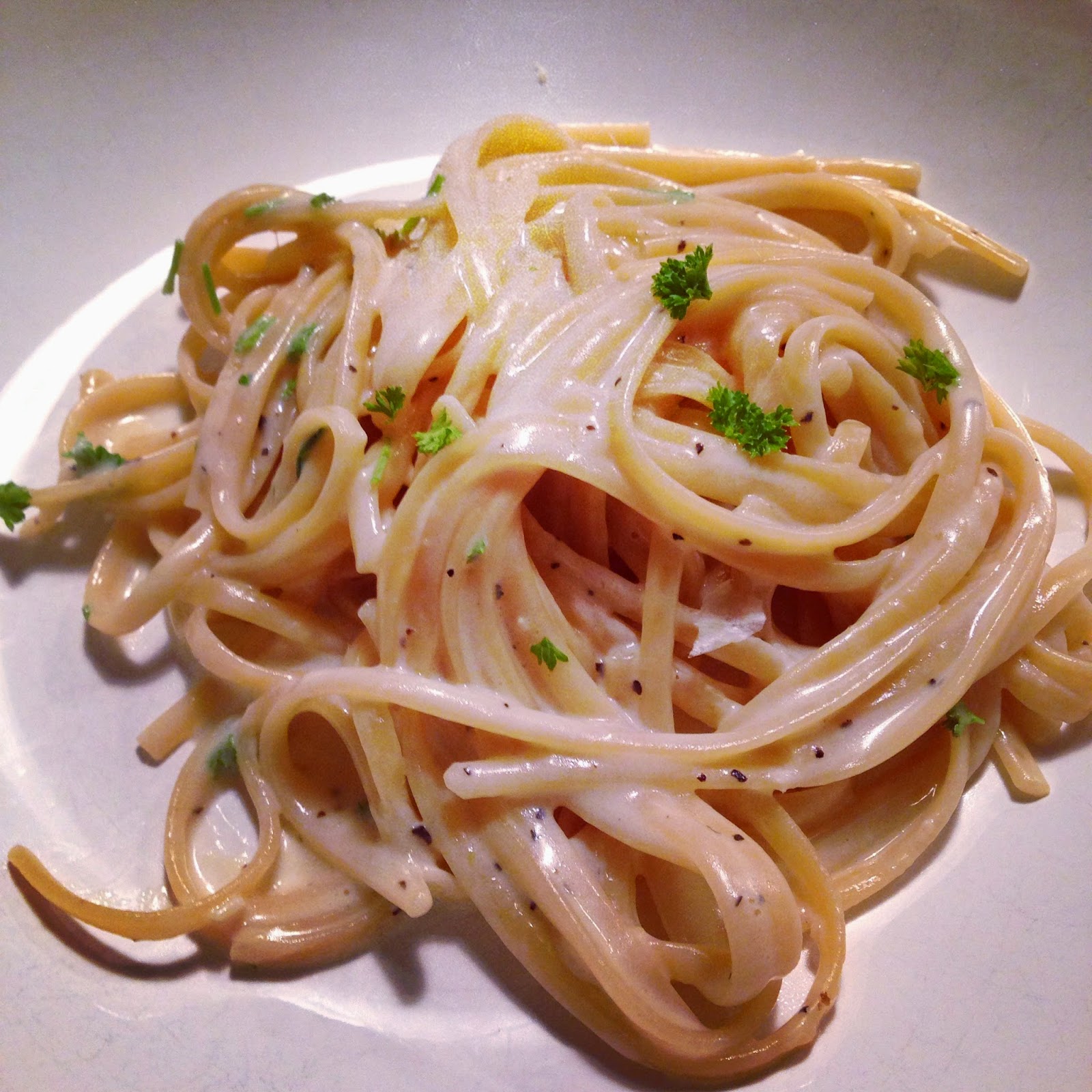 I found this recipe on pinterest and couldn't believe it could be cooked in one pot or be very tasty but the photos were mouth watering so I had to try it. It was amazingly easy and tasted like a cross between Lipton noodles (I used to make when I was a teen) and fettuccine Alfredo.

I was in disbelief that only using milk and chicken broth could get thick and creamy but because the pasta is cooked in it the starch thickens it up perfectly. The best part is that it is one pot. I used linguine but the recipe calls for fettuccine. You can also use spaghetti. I personally love linguine when it comes to creamy pasta recipes. I also changed this recipe by adding 2 cups of milk. In the original it is 1 cup. I made it twice and both times had to add lots of milk so now I make it with 2 cups. Try it and let me know what you think.

Heat olive oil in a large skillet on medium heat for 1-2 minutes just until garlic is cooked but not brown.

Bring to a boil, reduce heat and simmer for 18-20 minutes. I use tongs to move the the pasta around and will slowly thicken. You can add milk if it gets to thick. Once pasta is almost done add parmesan. Garnish with parsley and serve.
Posted by Andrea at 6:28 PM No comments: Links to this post 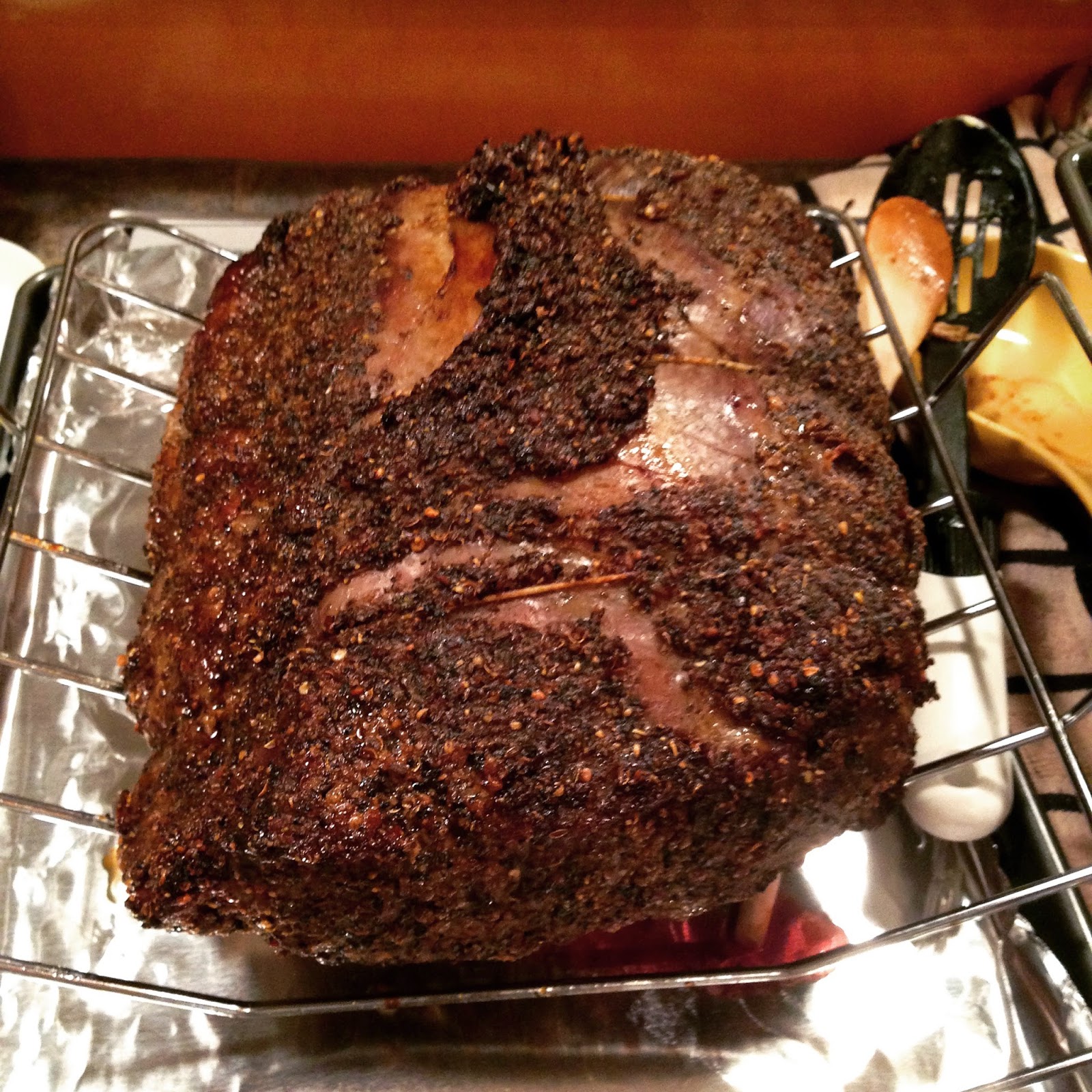 I cooked my first Prime Rib this New Years day. I was terrified I was going to over cook or under cook it because I have heard stories of both. My mom and I went to Costco and saw these pre seasoned and were worried we wouldn't like them and that they would be over seasoned but it was a perfect combination of peppercorn and garlic all done for you. They sliced it off the bone but kept the bone attached with string and layed a massive amount of garlic inside. All I had to do was place it on a pan and follow the instructions. This is what I did and it turned out perfect. I will no longer be afraid. I hope you to try it.

I will have to remember all of this for next year because it was worth all the stress and much easier than I every thought. The price was high but when I see that I feed 12 people and fed 8 the next day I think it wasn't that much after all. I hope my story inspires you to make one also.

I had the roast sit out for at least an hour before cooking.

I bought it pre seasoned so if you didn't I would just season with your favorites. I placed roast in roasting pan on a rack with chopped up onion, carrots chopped, and celery chopped.

I cooked it at 500 for 25 minutes then turned it down to 200 degrees. I basted it and cooked slowly for 3-4 hours until thermometer read 140 degrees. The directions said to cook for 20-30 minutes per pound. That gave those people who like it rare slices in the middle those who like it medium it was perfect for them on the end. I had a thermometer in at all times and made it very easy to watch without to much opening the oven.

Once the temperature was just right I took it out and let it rest for 20-30 minutes. In the mean time I made a gravy with the drippings and added left over au jus that I basted with. It was perfection and I can't wait to make another one. I was also surprised that we had enough left over to make french dips for 8 people the next day. 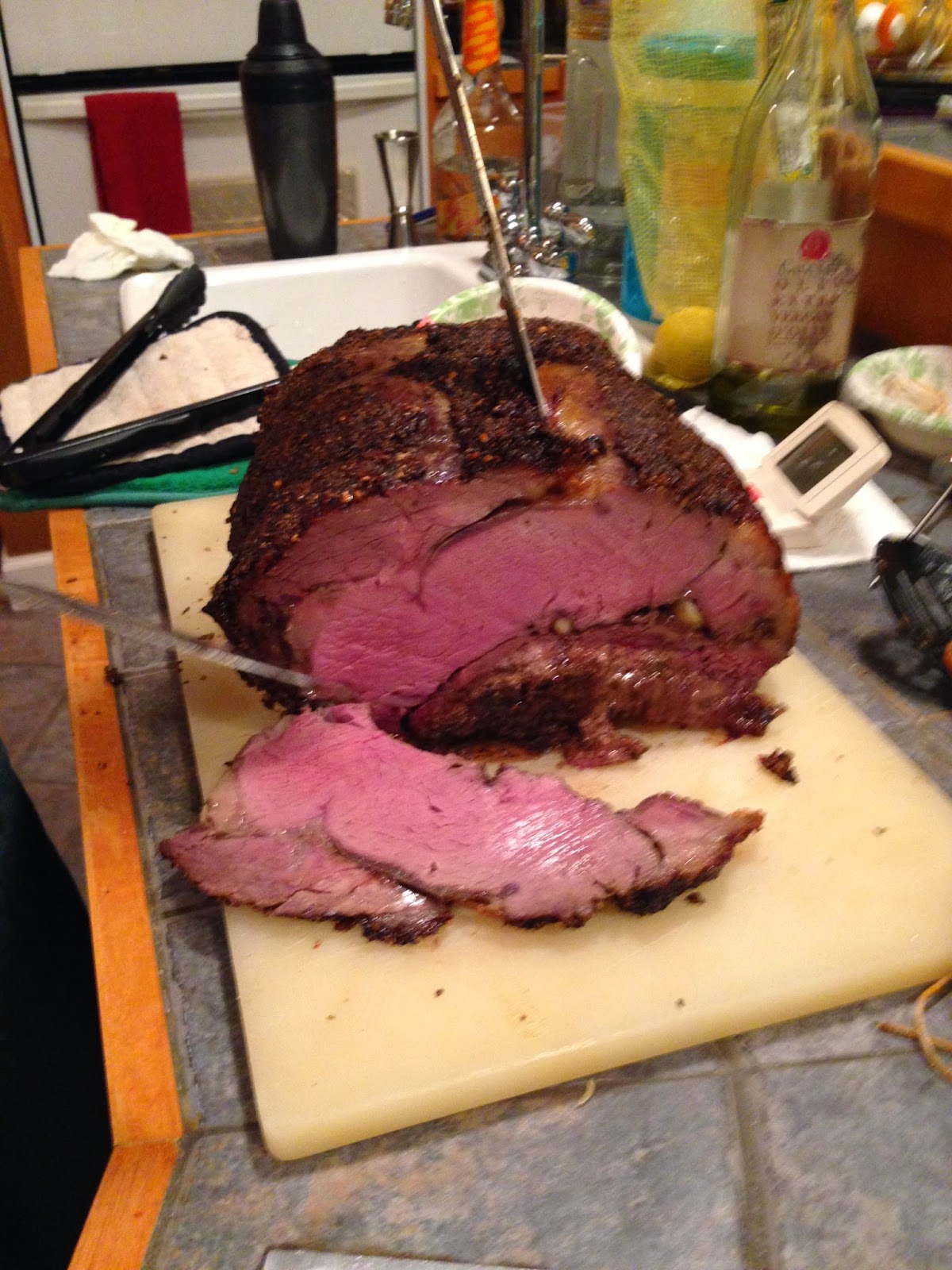