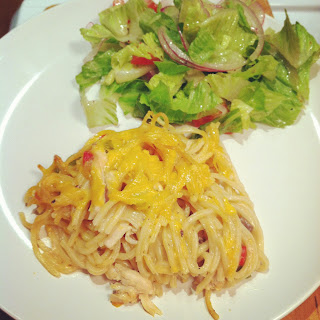 I am a huge fan of The Pioneer Woman's cooking show. I think what draws me there most is that she cooks for a busy family and I can relate. I first saw this recipe on her blog and they way it is described on there I didn't find it appealing. Then I watched her make it on the Foodnetwork and my mouth started to water so I thought I have to give that a try. I went to her blog to get the recipe and realized it wasn't the same. I went to the Food Network and it was different so I printed it instead and made it for my family.

My kids are not fans of cheesy pasta so I took this recipe and put it in two small 9X9 pans instead of one 9x13 pan. One I put in the freezer and the other me and my husband devoured. Luckily there was some left over for another night because it was big hit. I also loved that I could take the other half out of the freezer on a day I just didn't feel like cooking.

I wish my kids were like Ree's but they are just not willing to eat everything I make. So when they wont eat cheesy pasta I make them plain pasta with a little butter. I also changed the recipe slightly so if you want it exactly like hers click her name above and it will take you there. 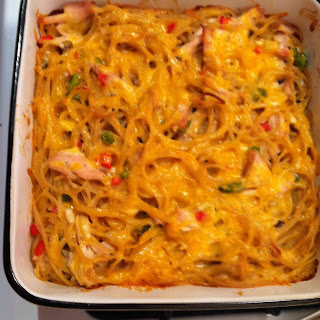 Preheat the oven to 350 degrees F.

Bring a large pot of water to a boil and cook spaghetti for 9 minutes. Do not overcook, if anything slightly under cook it. When the spaghetti is cooked, combine with the chicken, mushroom soup, 1 1/2 cups cheese, the green peppers, red peppers, onions, seasoned salt, cayenne, and sprinkle with salt and pepper. Stir in 1 cup chicken broth, adding an additional cup if needed. You don't want it too dry.

Place the mixture in a casserole pan and top with the remaining 1 cup cheese. Cover and freeze up to 6 months, cover and refrigerate up to 2 days or bake immediately until bubbly, about 45 minutes. (If the cheese on top starts to get too cooked, cover with foil).