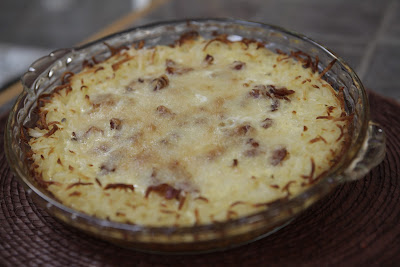 I saw Paula Dean make a hash brown quiche once on the food network and I have been making them ever since. Hash browns have been a favorite of mine since I was a kid. However I didn't start liking quiche until my twenties. Now love them together. If you make this you will rarely find a piece  leftover. I altered Paul Deans recipe to what I like best. This Christmas I made one with sausage. It is quite easy to make and super delish. Try it and leave a comment.

In a 9 inch pie plate, toss melted butter and hash browns. Gently press hash browns into the bottom of plate and sides to form crust. Bake for 20-25 minutes or until golden brown. while that is cooking cook bacon until crisp.

In a large bowl mix together eggs, half and half, and salt and pepper. Add cheese, bacon, sausage, and scallions to bottom of the crust. Pour egg mixture evenly over the top. Return back to the oven and lower temperature to 350 degrees. Bake for 30 minutes or until it is puffed up and golden brown. Let rest and then slice. 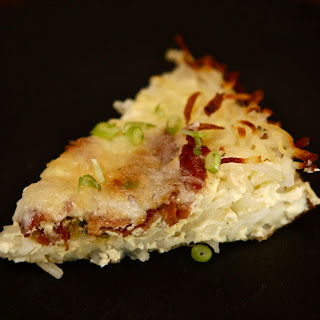