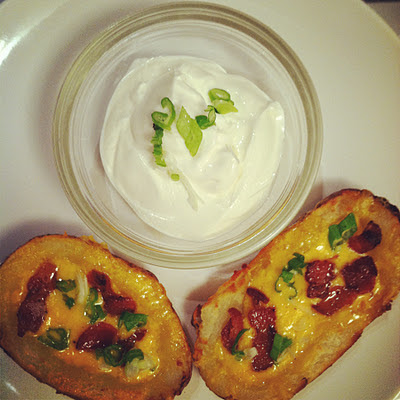 I was checking out other food blogs and found one who posted potato skins. It is inspired me to try and make my own. I love to order this at a bar/restaurant but find that they rarely make them delish. I bought small potatoes because I feel they should be eaten in 3 bites. I cleaned them wrapped them in foil and baked them at 400 degrees until I could stick a knife in easily. Nothing worse then an uncooked potato. Then I took her tip and removed the foil immediately and set them out to cool. She said this would keep skin from getting soggy. I can't tell you how many times I ordered them and they were a little soggy. I let them cool just enough so I could slice the potato in half and dig out the center leaving about a 1/4 inch of of the flesh. Her next tip was to brush with melted butter and broil for 6 - 8 minutes. I broiled for 6 minutes because my pan is very close to flame and they browned fast. 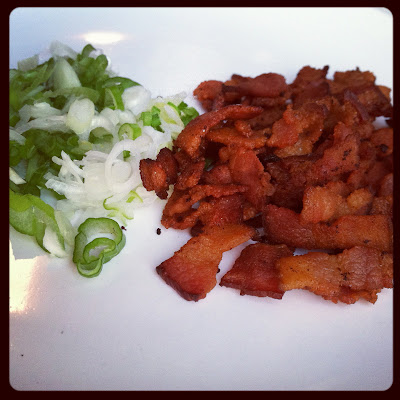 Then I added shredded cheddar cheese, bacon bits, and scallions. I like to dip mine in sour cream. They turned out delish and Ben and I gobbled them up like it was our last meal. Try them and let me know what you think. If you want to see her recipe, I attached her blog on my page. Click on favfamilyrecipes. She has some great ones.
Posted by Andrea at 2:27 PM