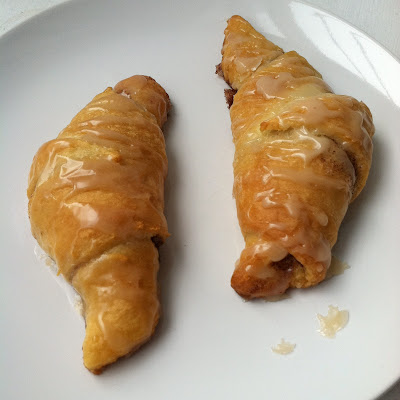 I found this blog that featured these rolls. They looked so good that I immediately pinned them so I could find them again easily. I went out and bought some crescent rolls. By themselves I think crescent rolls are average but I have used them frequently to make cocktail weenies. Jennifer's rolls looked so good that I had to give it a try. Mine look good but hers looked amazing. I was worried they wouldn't taste as good as I thought after they came out of the oven. She used brown sugar and I didn't have any so I used white. My glaze came out a little to brown so I think next time I will use less vanilla. However, I ate one and have to say they were super delish. I only made one package of crescent rolls because I was afraid they wouldn't be good. I regretted that decision because I could have easily ate them all. Make these and let me know what you think. Also check out Jennifer's blog Jennifer Cooks

Email ThisBlogThis!Share to TwitterShare to FacebookShare to Pinterest
Labels: Breakfast